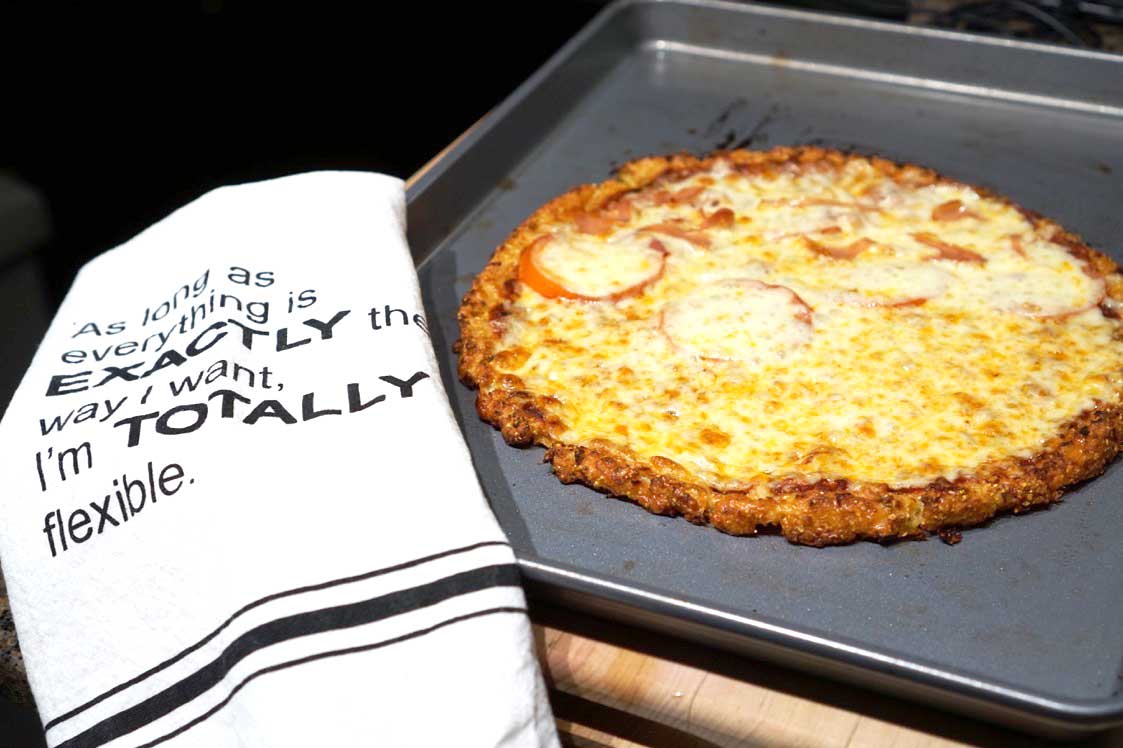 My sister and I have been reading the Addictocarbs book and (trying) to abide by its principles.  We were introduced to it on our cruise by our aunt and uncle, who raved about it.  The premise is that some people are addicted to certain carbs, and the only way to kick the habit is to go cold turkey for a while.  So cold bird we went (after our cruise, of course).

Along the way I decided to try my hand at this cauliflower pizza crust that I see people talking about on Instagram. Spoiler alert:  It was an epic fail. But, I think it could be really good if done correctly.

I followed this Green Giant recipe even though I used Farm Day organic cauliflower rice from Whole Foods. The beauty of the cauliflower rice in the bag is that you can just pop it in the microwave for 4 minutes and its cooked. Otherwise you could chop it up in a food processor and cook in the oven but really, who has the time?

Here are the ingredients I used.  The Topo Chico water is not part of the dish; I was just drinking that as I cooked.  (Separate post on sparkling water comparisons to come.  I decided to use fresh tomatoes and prosciutto for my toppings on half, and do a regular “cheese pizza, just for me” (name that movie) on the other half. 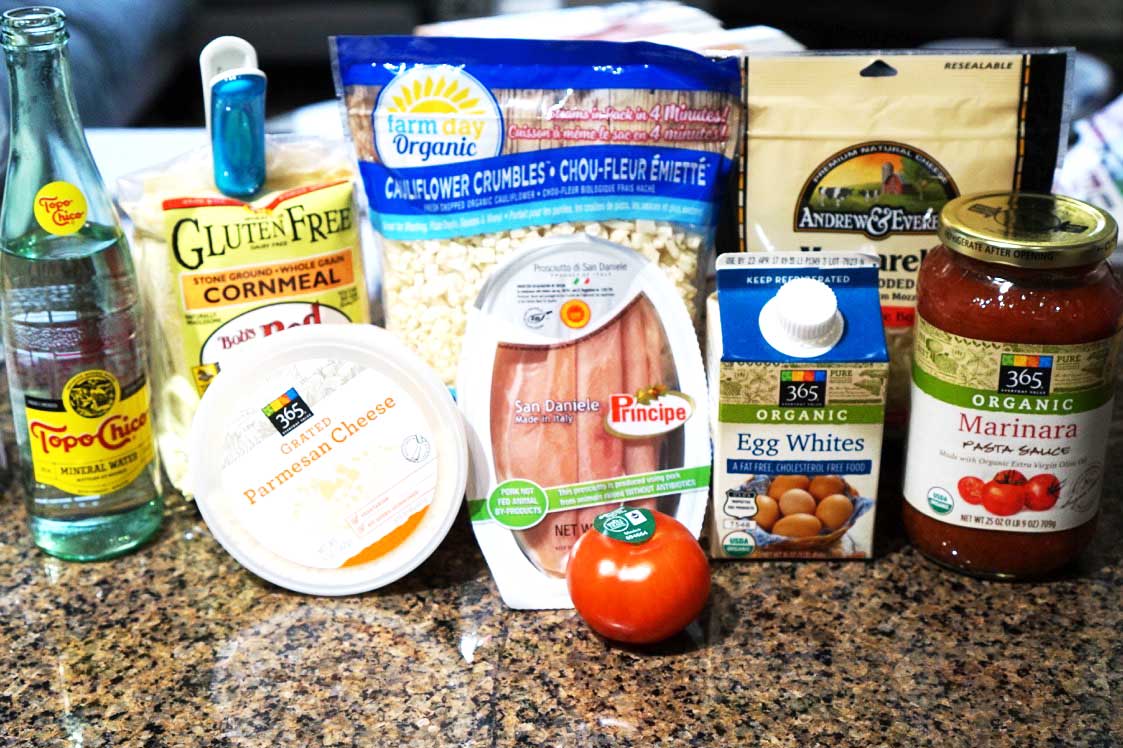 You use just a little bit of cornmeal, which helps the crust crisp up nicely, and technically it is not flour so it is acceptable on the Addictocarbs diet (I think). 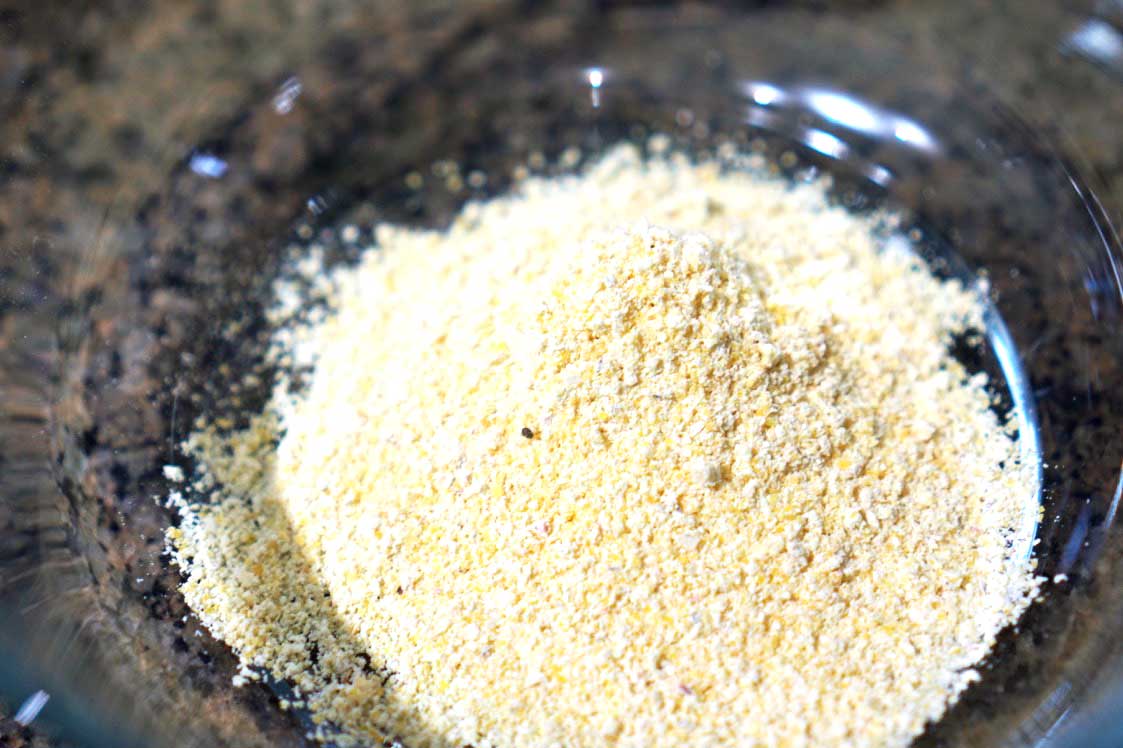 So the good and the bad.

I will pat myself on the back for having read tips on the internet and knowing to squeeze all the moisture out of the cauliflower once cooked. I put it on paper towels on top of a wire baking rack to cool, and then picked up the edges of the paper towel and squeezed the c-flower over the sink.  This could also be done with a clean dish towel, but honestly, I’ve never understood using clean dish towels to hold food.  It came out of my washing machine and dryer with lint and other things, so how clean can the towel be?

Here is what the rice looks like while drying. 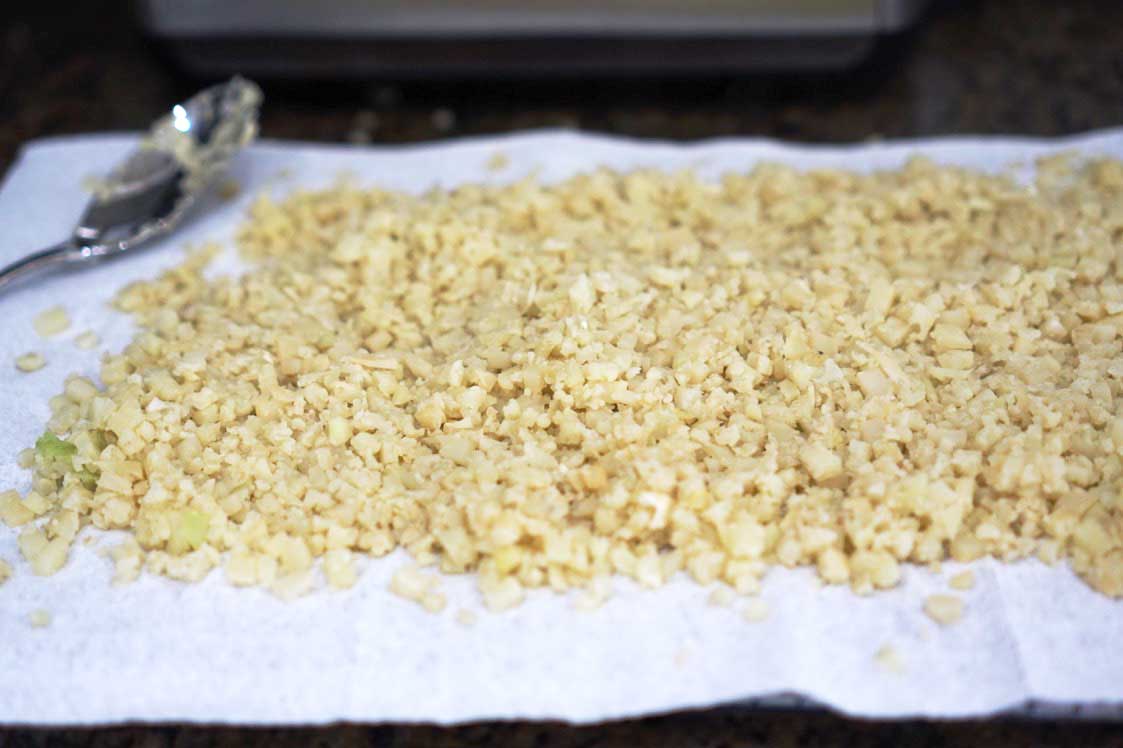 This is important otherwise your crust could be soggy (or so I’ve read, this was not a problem for me).  The other hard part is pressing the crust out into a circle.  It tends to break apart, so you have to keep pushing it together while flattening and widening it.  I suppose this is the case with any crust-making 🙂  but seemed a little harder with this than with a dough that adheres to itself.

Here is a pic of the crust before I put it in the oven. 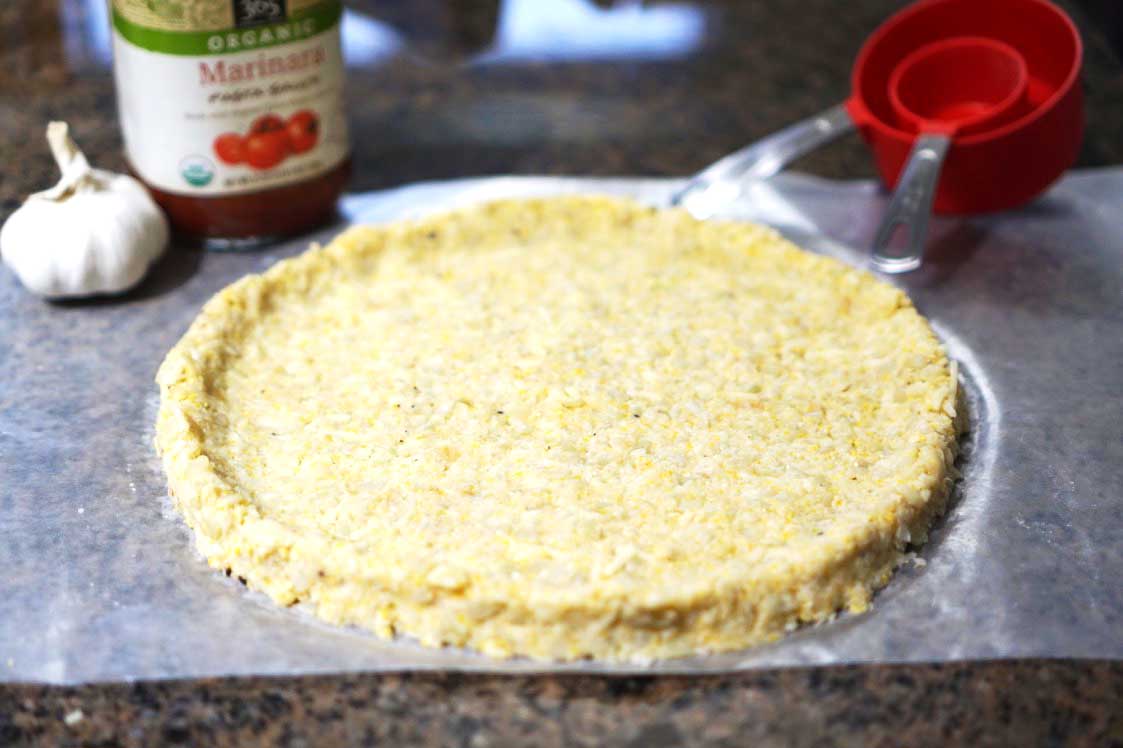 So you might have already guessed my first mistake.  I used wax paper rather than parchment paper.  Yeah.  I thought it was slick, so it wouldn’t stick.  Instead, wax paper is like a candle; when heated, the candle wax melts into the crust.  So that’s exactly what happened and I could not peel it off.  So instead I took my sharpest knife and cut the bottom off.

Which left me with no real crust on the bottom, so I baked it again.  Only the second time I decided I would be smart and put it directly on a wire rack to cook more quickly.

This was my second mistake.  I did not spray the wire rack.  Because the crust has cheese in it, this stuck to the wire rack, and again I had something stuck to my crust!  Grrr.  When I tried to pull it off the wire rack, it was coming apart. Efforts to poke through the little holes in the wire were just poking holes in the crust.  So then we decided on a more gentle approach . . . 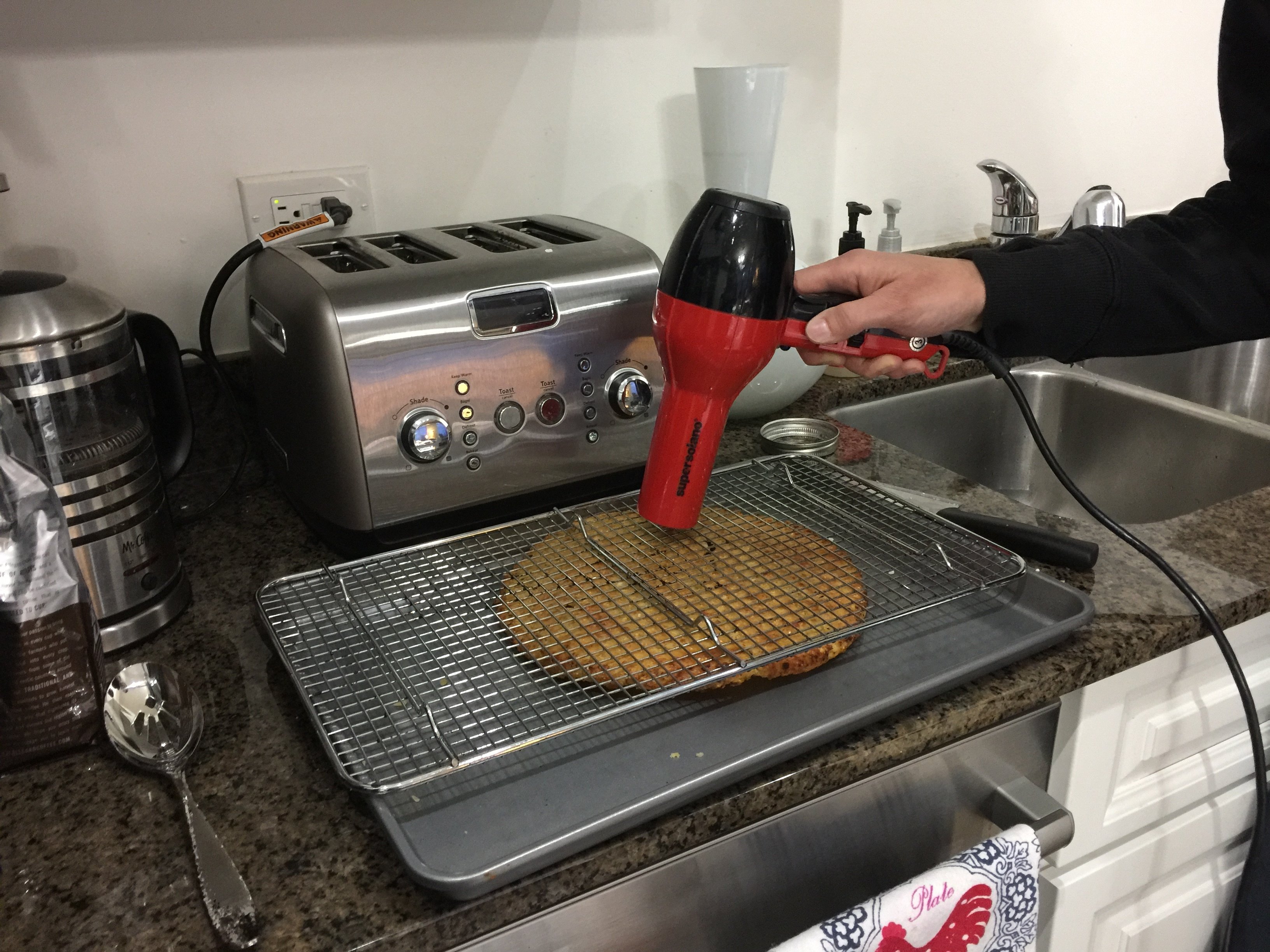 Creative, but can’t say it was all that effective – I again needed my sharp knife to cut the crust off the wire rack.

So with a crust 1/3 the size it should be, we loaded it up with toppings.  Prosciutto and tomato on the right, plain cheese on the left.  You can see how nice the crust looks, though.  Good, right? 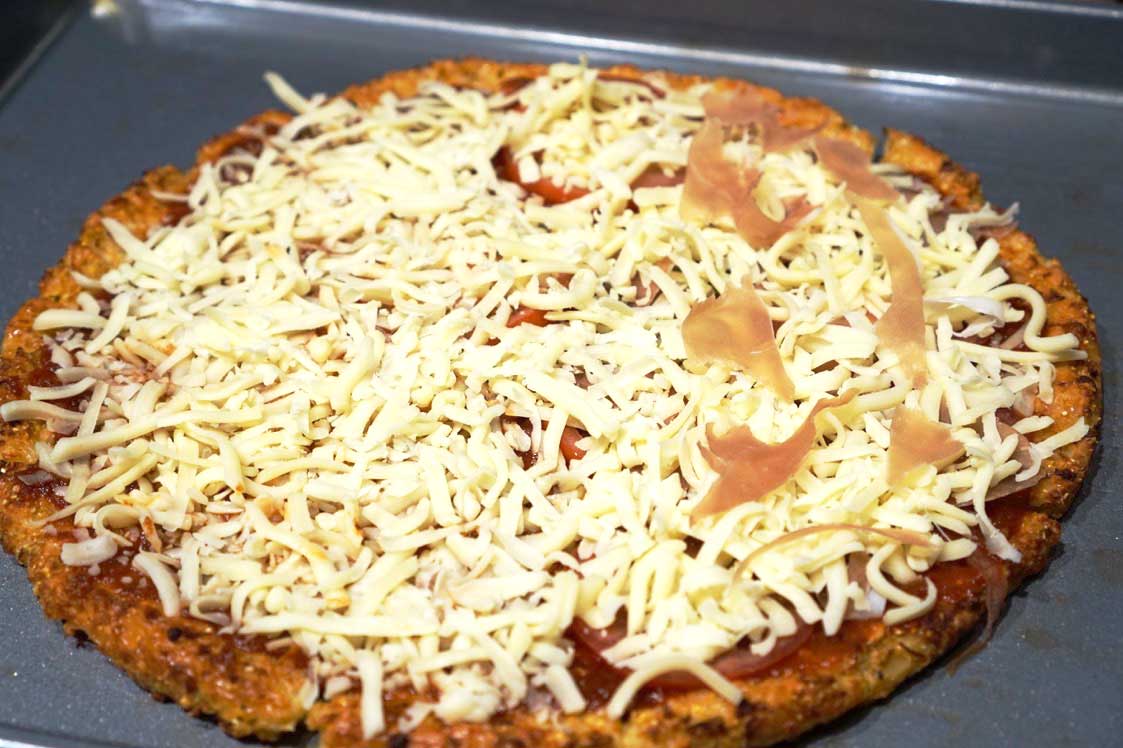 So then we continued to cook it per the Green Giant’s instructions, and voila! 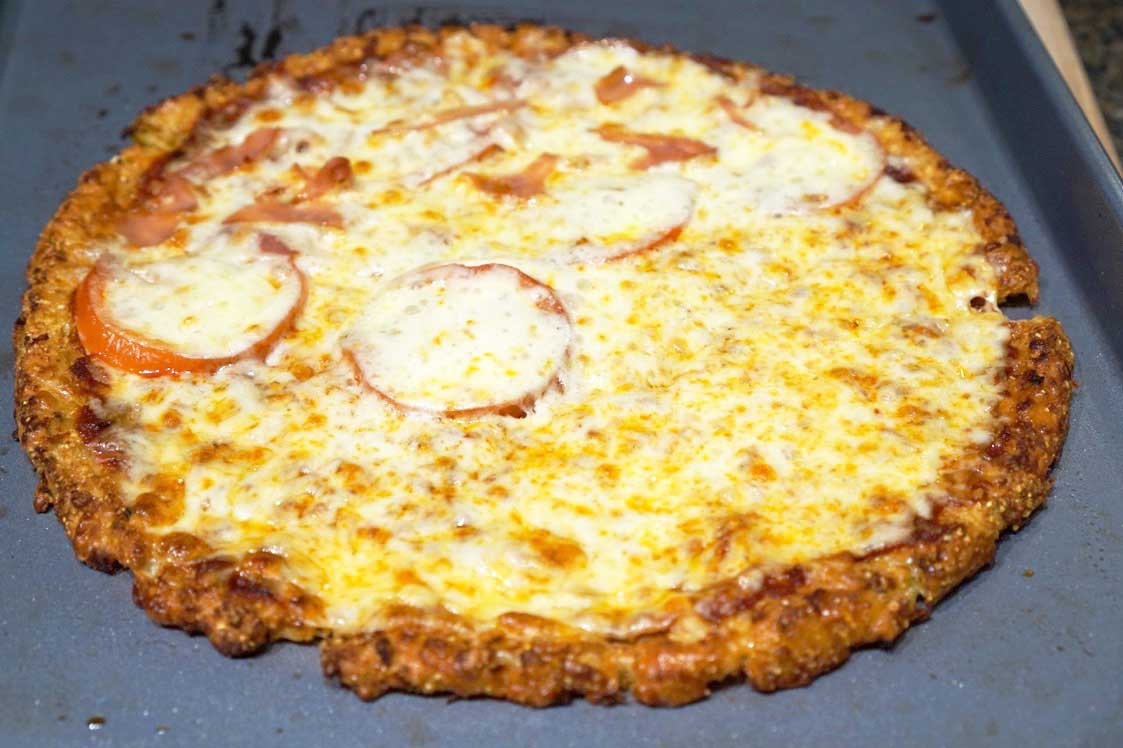 I think I also aded a little too much cheese.  Would’ve pulled back on that and maybe also broiled it to get the cheese to burn a little on the top (that’s how my dad and I like it),

Verdict?  The crust didn’t hold the toppings, but It think it would have had I not cut it down twice.  I also would take down the amount of garlic/onion powder in the recipe – good flavor, but it was a bit much for me.

I will definitely be trying this again and hopefully next time will get it right?

Have you tried cauliflower pizza?  How did you like it?