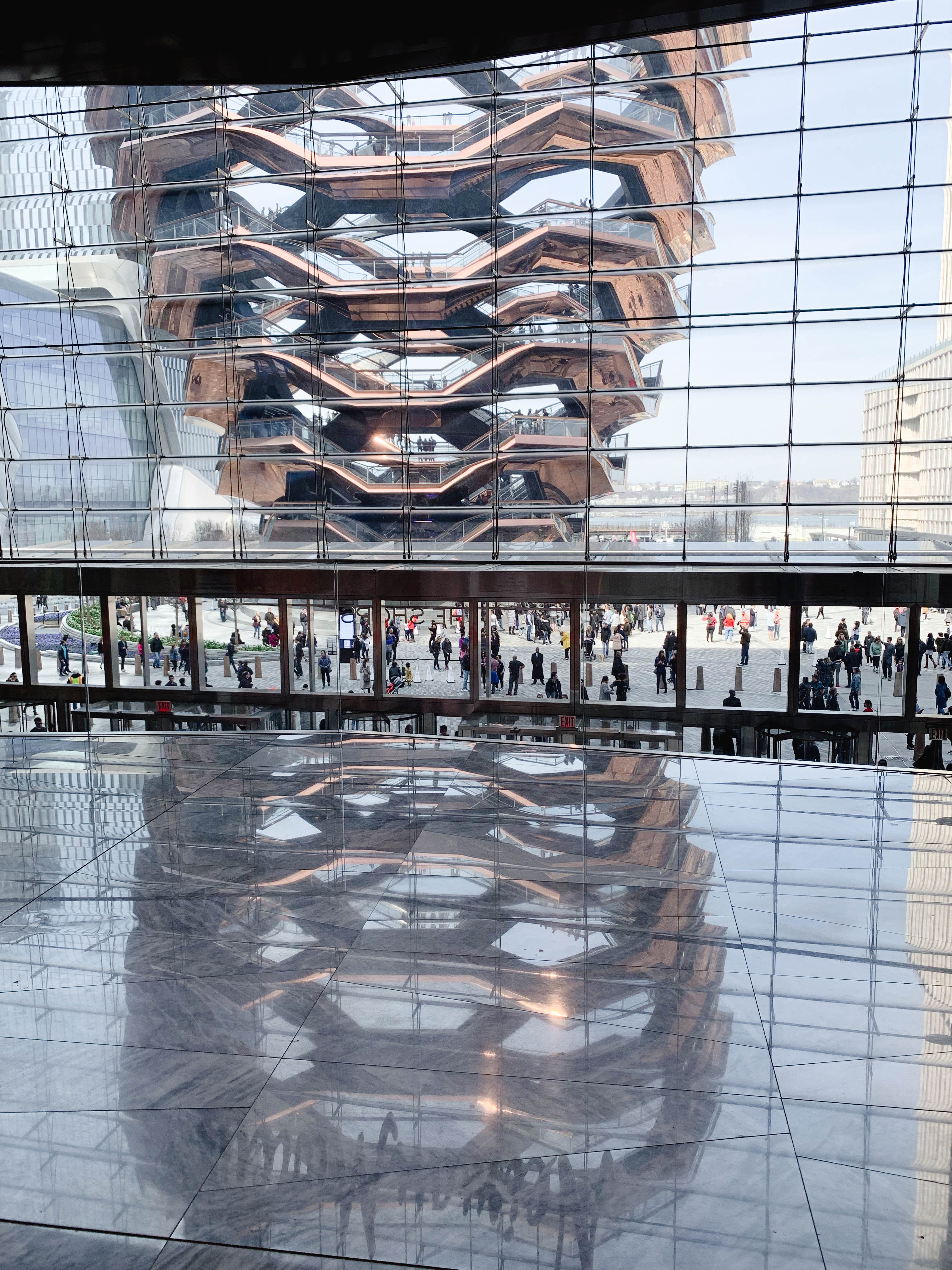 Two weeks ago the long awaited Hudson Yard complex opened. Of course I didn’t want to go the first day because I don’t like the crazy crowd that come with that spectacle. To wait two weeks was good enough for me in order to check this out… and most of New York had the same idea!

Getting there is pretty easy, especially if you live off the 7 subway line like I do. It’s the closest subway line to the complex, but the A, C, E, 1, 2, and 3 subway lines all stop at 34th street. Then it’s just a quick walk over.

Once you emerge from the escalators from the subway line you’ll turn right. If you’re worried about which way to go, follow the crowds — they’ll take you the correct way. The first thing you’ll see is a crowd of people. They’re all waiting in line to climb the Vessel. That’s the huge honeycomb-like structure in the picture above. You’ll have to make your way around the hoards of people taking pictures as well. (I couldn’t help myself!)

Ok, this is the reason I came to Hudson Yards – to check out the shops. As a child who grew up hitting every mall in driving distance in the Chicagoland area, I had to check this one out. It’s anchored by Neiman Marcus, the first and only one in New York city. I’m not a huge fan of Neiman’s because I usually find them majorly overpriced, but it’s still a good place to go and window shop. If I ever have a black tie event, it’s the first place I’ll go to buy a dress. They have everything there!

It’s an interesting mix of shops with high end ones such as Chanel, Tods and Fendi, along with the normal ones such as Banana Republic, Athleta, and Madewell.

I was surprised to find a MGemi shoe store, one of only two brick and mortar stores in the United States. I recently got a pair of their loafers and I’m now a fan.

It also has some strange shops like Forty Five Ten. It has clothes for both men and women, a vintage section, and is almost like an art gallery itself. I popped in to look at the vintage section which was small, but pretty cool.

Not all the restaurants are open yet, but of the ones that are, the choices are decent. Since I was exploring alone, and wanted to save time (and money!) I opted for a quick bite. Bluebottle Coffee is located right off a set of escalators which I think is a bit of poor planning. When I was there a huge line had formed and getting off the escalator was a bit dicey to say the least.

Bouchon Bakery and Citarella Gourmet Market were both hopping. I ended up having lunch at Queensyard Cafe. It reminded me a bit of Pret A Manger with the selection. I had an egg salad sandwich and a bottle of Badoit. I felt like I was back in France!

I did want to try the Mercado Little Spain market, but it doesn’t open till 5 pm. I guess I’ll have to go back when it’s open! There are also a number of stores that have yet to open, so I will be going back.

Unlike normal malls, this one has some interactive art installations throughout the mall. It has the Vessel, where you can buy tickets ahead of time to climb the stairs. It also has a space called “Snark Park.” For $28 per adult, $22 for kids 4 – 12, you get to explore the Lost and Found.

“Lost and Found is an interactive design environment that invites visitors to navigate a unique world created by Snarkitecture. The installation consists of an array of massive cylinders, forming an immersive monochromatic landscape, reminiscent of a modern day enchanted forest. Visitors are encouraged to get lost within the labyrinth of columns and encounter intimate, secret worlds hidden within several of them. Some spaces are large enough to occupy, while others are intended to be viewed from outside, each experience is a unique exploration of materials, activities and memorable shifts in perspective.”

It sounds like something that could be fun with a group of friends, or to take your kids. Although it’s not at the top of my list, it’s something I might do one of these days. Hudson Yards is a pretty cool new place in New York city. I love having a new mall in which to roam, so hopefully they’ll add even more fun stores in the future.

What do you guys think? Is this something you’ll want to check out? Or have you been? Let me know in the comments!

Get Your Free How To Create a Wardrobe Guide 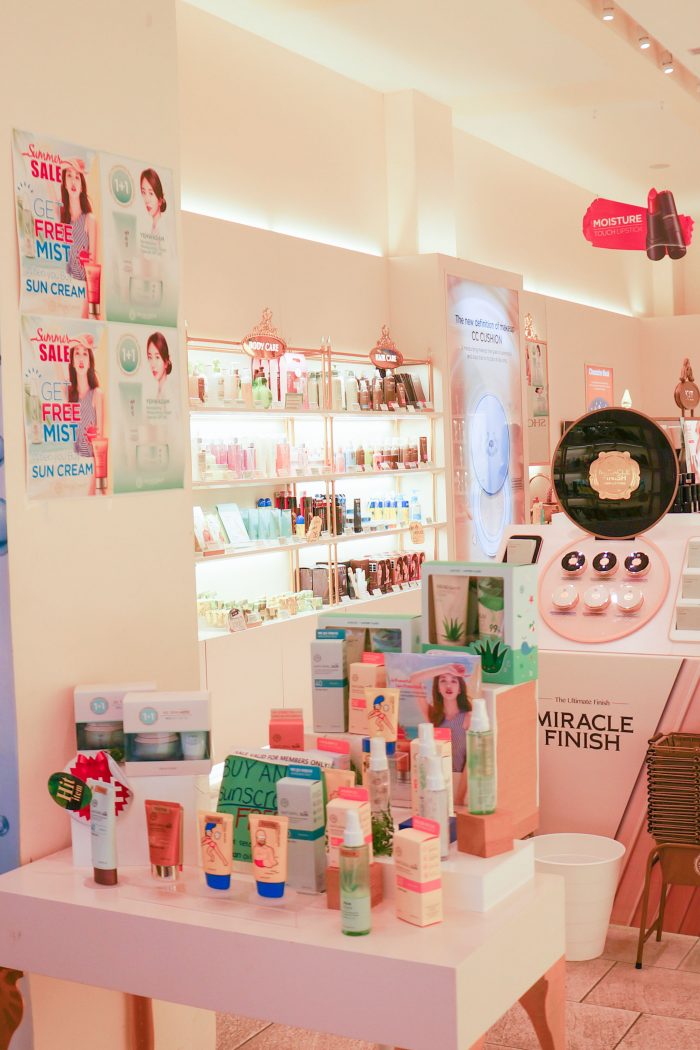 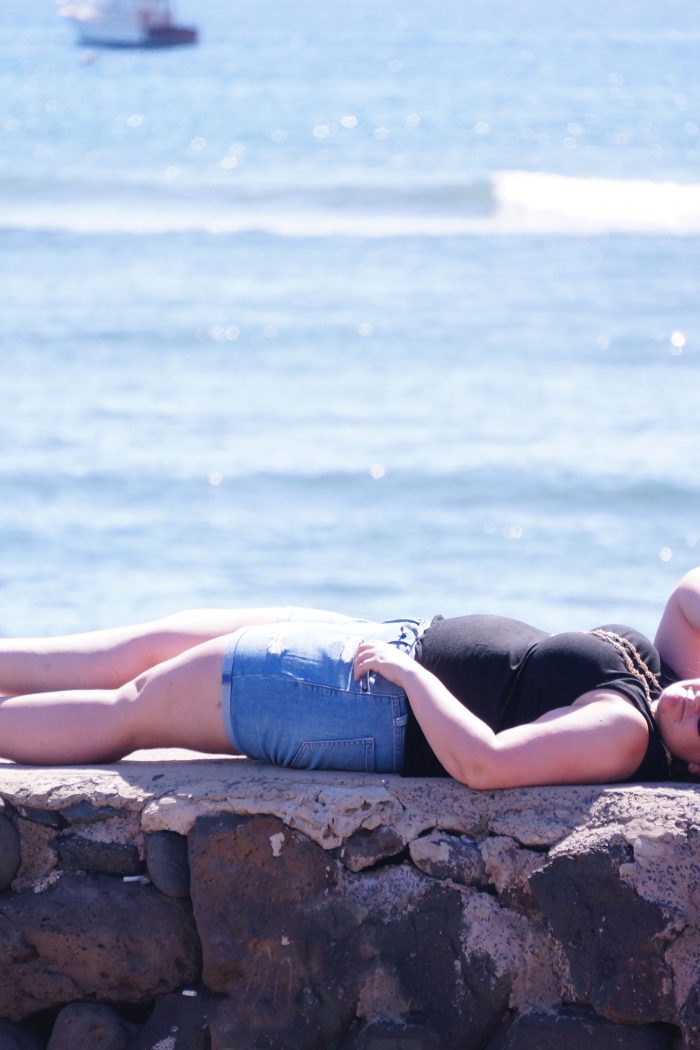 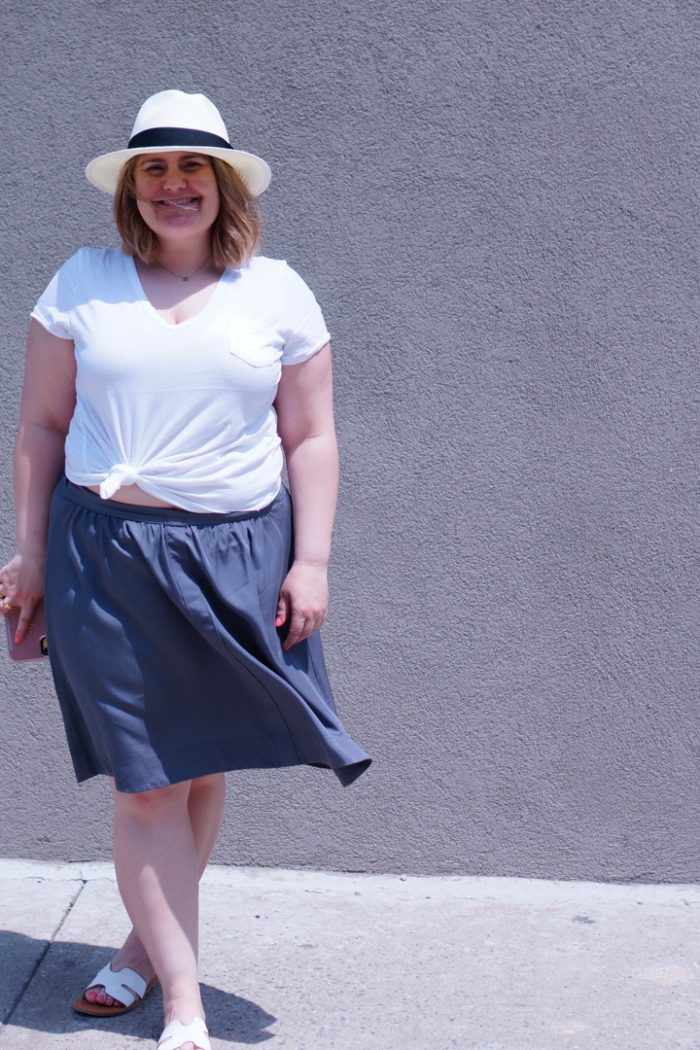 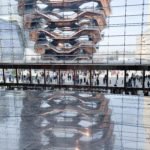 Checking Out The Newest Mall in NYC: Hudson Yards

Guess who got creative on their day off? This girl

Happy 4th of July to all my American friends! Ther

I was having a good hair day. 🤩 Any tips for ge

Excited for a short holiday week but right now sit