Combat boots usually bring to mind punk rock, The Sex Pistols, and CBGB’s.  Not this year.  Fall is all about the combat boot thanks to the fashion designers who sent them down the runways.  I’ve always been a fan of combat boots; I got my first pair in 1990 (!) on my first trip to England.  They’re as old school as they come… Dr. Martens.

Even though the fashion designers sent looks down the runway with combat boots, I wasn’t 100 percent sure it would become a street trend.  After seeing Kourtney Kardashian, Hailey Baldwin, and Malia Obama wearing them, I’m in.  It’s a trend and it’s gonna be huge for fall 2018!

I’ve taken their lead and created two different looks with the same black dress.  I love the way the white and black of the Dr. Martens give the look a pop.  I think they’re also funky enough to make the outfit fun and not too clunky. 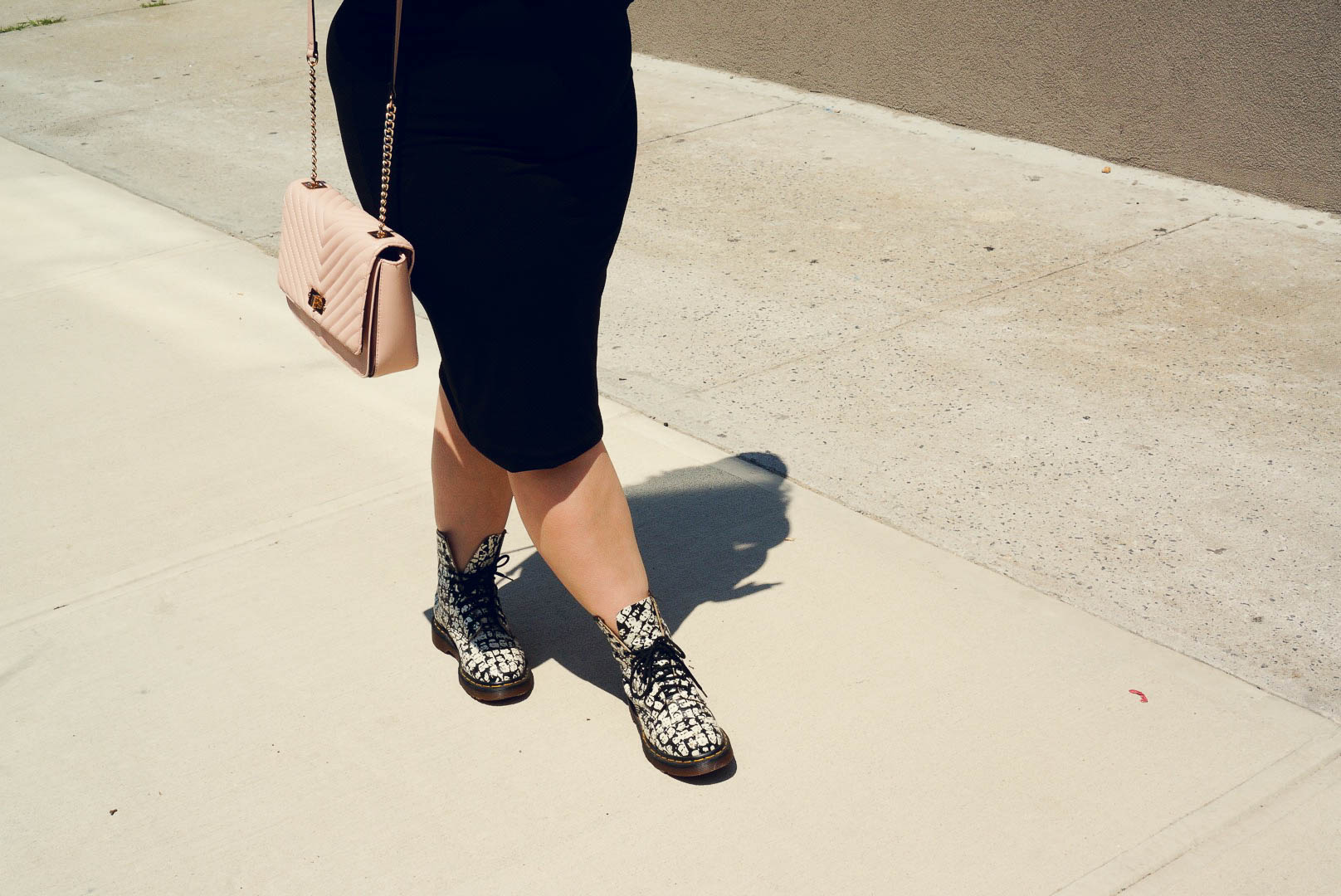 (Unfortunately, these ‘faces’ boots are no longer available; they’re vintage.)

Now, in the photos below, I’m wearing a different version of the combat boot.  This is a little less structured and flops a bit more.  The zipper detail allows the foot to slip in and out easily and makes tying the shoes unnecessary. 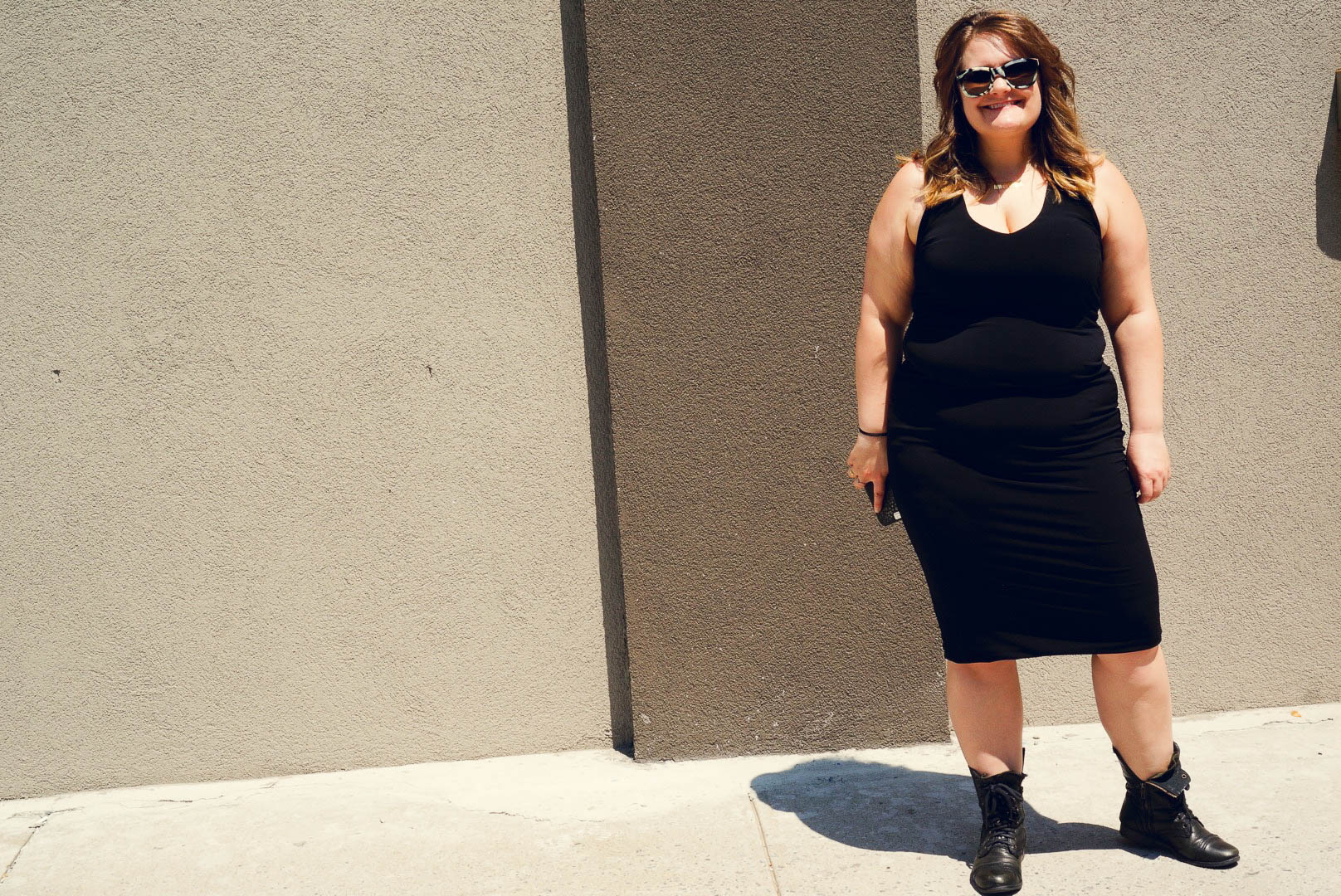 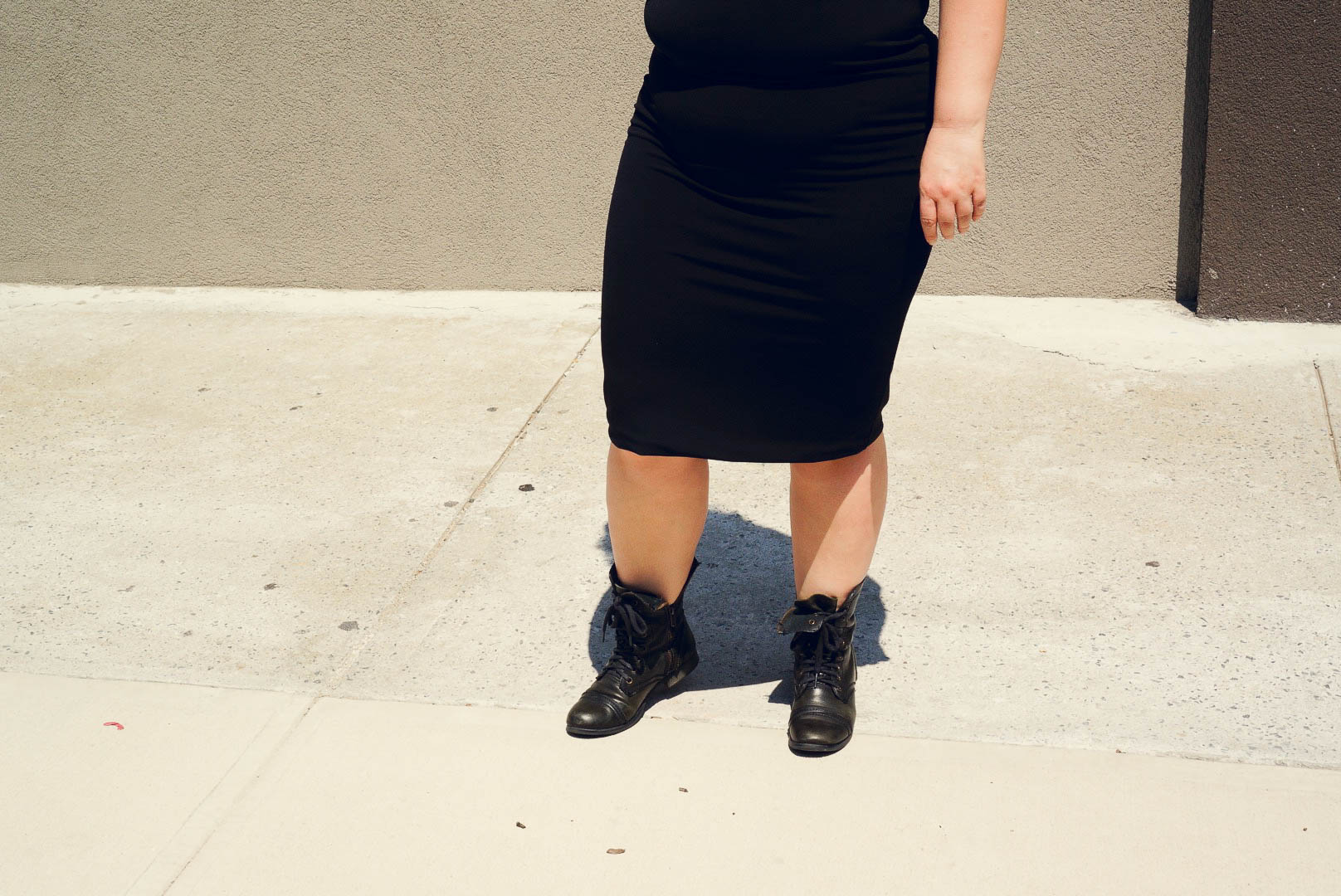 There are so many for sale now and fall is about a month away, so I’ve rounded up some high-end and low-end picks for you below. 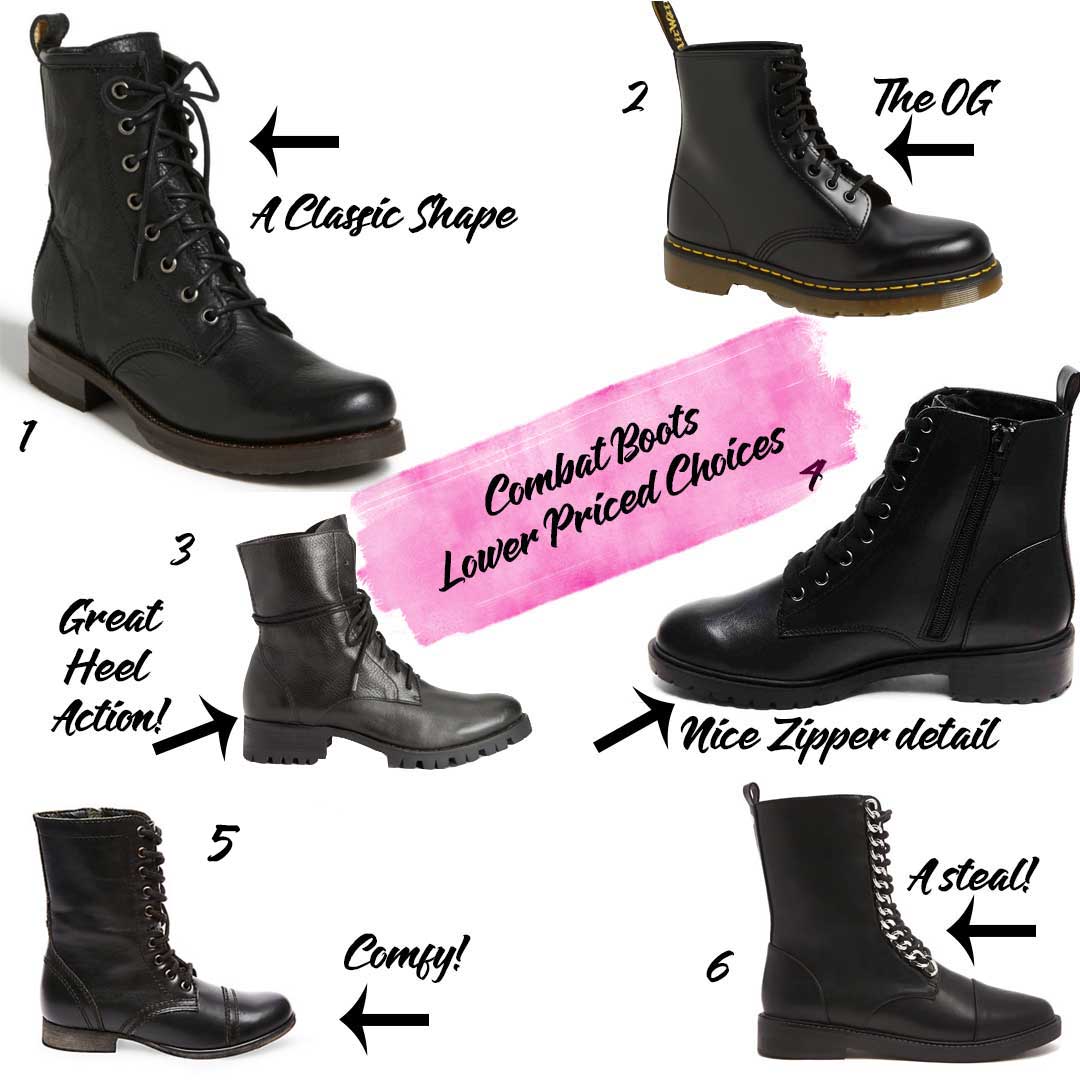 I love the Frye Veronica boots.  As my sister will tell you, I’ve been obsessed with Frye boots for years now, but have yet to make the plunge into buying them.  I know the cost per wear will equal out to the price of them, but to be completely honest I’m afraid I’ll love every single one of their items and only buy from them.  I know, ridiculous!

The Dr. Martens are the ones that started the entire combat boot trend.  The boot itself started as a boot with bouncing soles in 1960.  I don’t think their sole is that bouncy, but it’s certainly durable.  As such it was sold to the British masses as a work boot for £2.  It burst on to the music scene when Pete Townsend of The Who wore them.  After that, the punk era of the 70s began and with it, took the brand to new heights.

The Romy boot by Splendid as a bigger heel than some of the other choices.  Right now it’s on sale.  It’s a less chunky way to wear the trend with a dress.

Two Steve Madden boots give you great bang for the buck on this trend.  And the last one, from Forever 21 has great chain detail on it that brings to mind this boot by Rebecca Minkoff for a fraction of the price.

However, if price is no object… 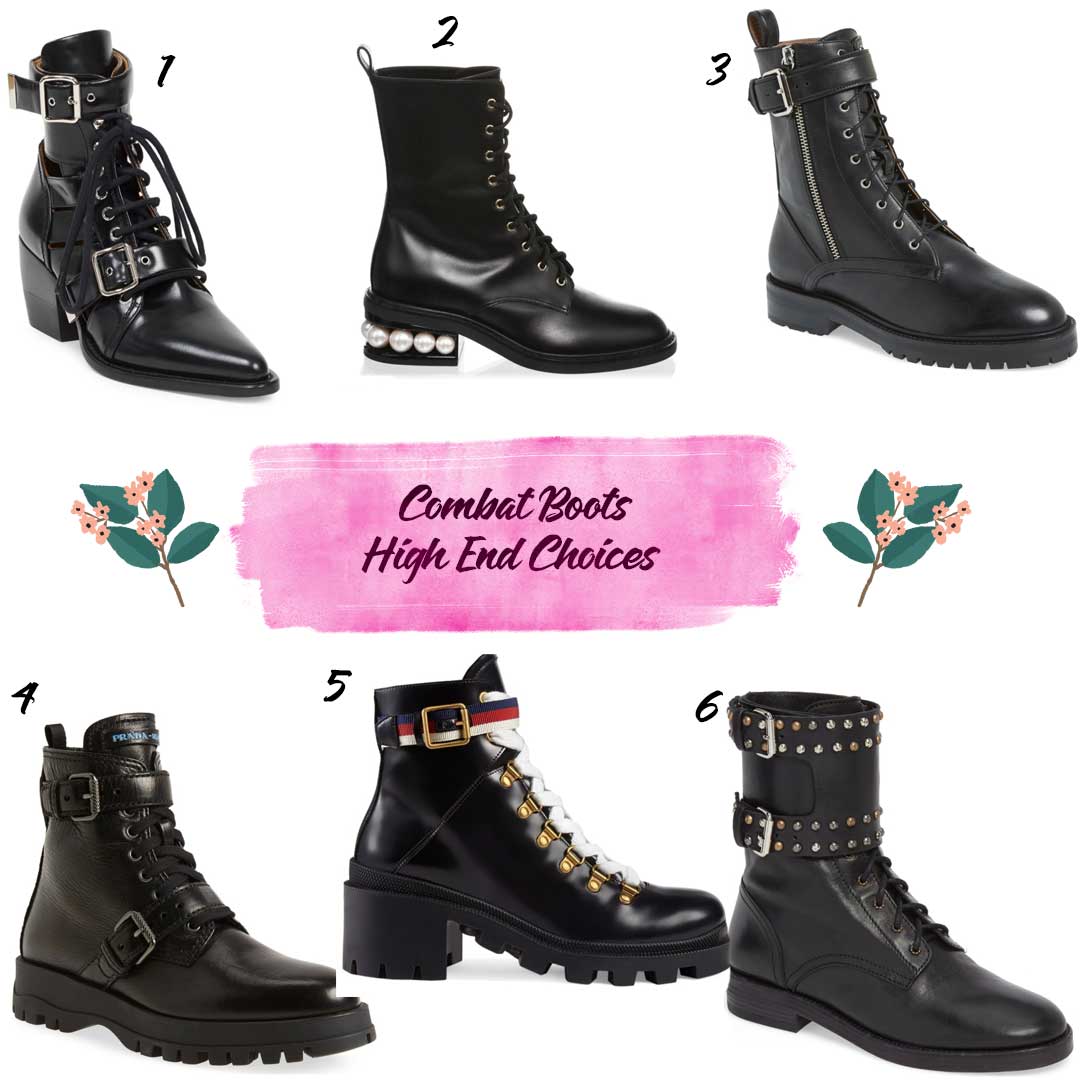 The Chloe Rylee is slightly different from the others due to its shape and higher heel, but I like it all the same.  This is for the gal who doesn’t want to go all in on the tough shape and still maintain their girliness.  It also has cut-outs on the sides to show a hint of ankle, which can be quite sexy.

Another good one for playing with femininity is the Nicholas Kirkwood.  The pearl embellishment in the heel strikes a nice balance between tough and flirty.  It would look especially cool with a LWD (little WHITE dress).

The last four boots have the same look, but it’s the little touches that set them apart from each other and the lower end boots.  The Tabitha Simmons boots (3) have a streamlined look accentuated with the one strap.  The Prada ones (4) have a more rugged feel to them with the two buckles.  The lug sole is also more pronounced which gives it that harder look.

Who can miss a Gucci (5) shoe with its trademark ribbon?  The white laces also set it apart and give it a whimsical feel to an otherwise hard boot.  Last are the Isabel Marant ones that have the two studded straps.  Again, the designer is playing with the juxtaposition of fun and practical all in the same boot.

No matter which way you look at them, combat boots are gonna be huge.  The only hurdle is figuring out which ones to get.  For those of you wondering what you can pair them with… a dress is always a good idea.  I love playing with the hard and soft, like Malia did at the start of this post.  I also would pair them with a great skinny jean, or a boyfriend jean with the cuff rolled up.  The items I would stay away from wearing them with would be dress pants, sweatpants, and boot-cut or wide leg jeans.  Other than that, go for it.  What do you guys think?  Are you gonna start rocking this trend?  Let me know or tag me on your insta pics!

Toughen Up – Combat Boots for Fall